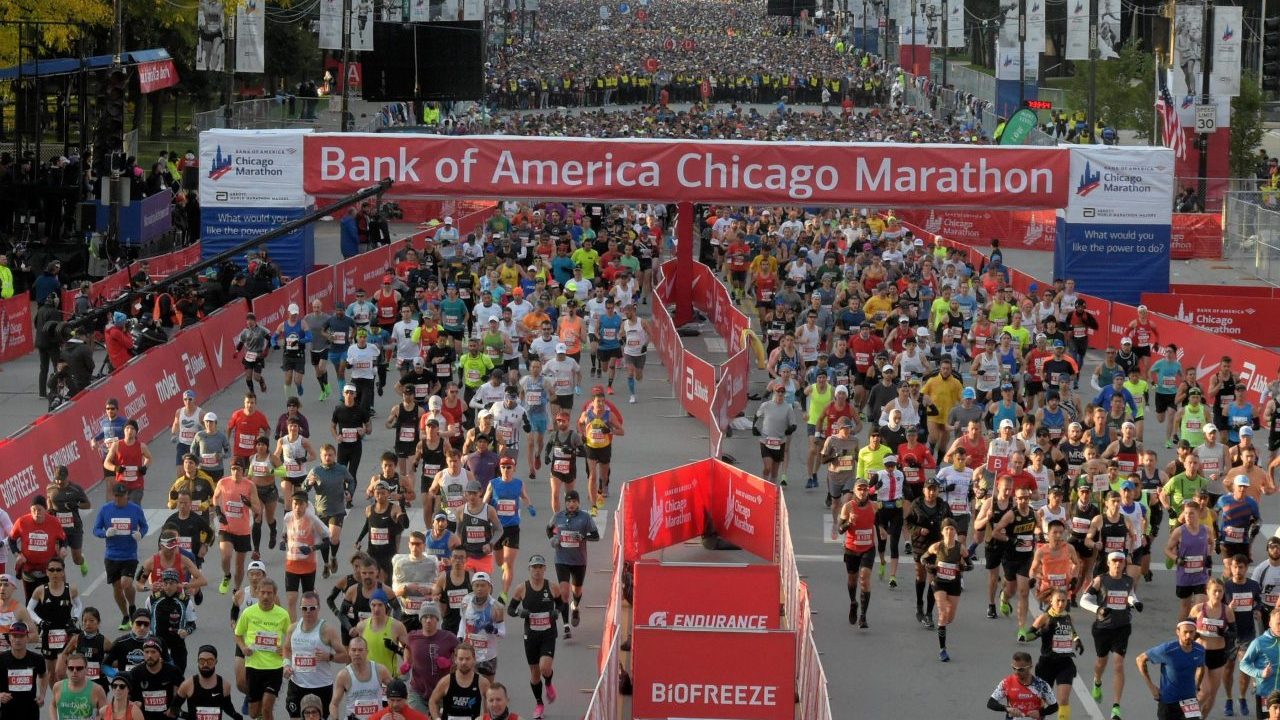 The Chicago Marathon usually held mid-October, is one of the six marathons from the Abbott World Marathon Majors series. It is one of the easiest to get into, with ballot chances close to 50% and generous qualifying times – to qualify for 2020, it was 3:20 for men, 3:50 for women in the 40-49 age group.

Its course is remarkably flat, and albeit it may be really windy, you can use it for your own good if applying smart racing tactics and set your Personal Best, earn a good amount of points for the AbbottWMM Wanda Age Group World Rankings, and get one star closer to the coveted Six-Star Finisher medal.

First things first: if you’re planning your participation in the Chicago marathon well in advance, arguably the best place to stay in Chicago is the Congress Plaza Hotel. It is literally a few hundred yards away from the race start. And if you’re booking it a year in advance (use free cancellation option just in case), you’ll get quite a decent rate.

The best price for the plane tickets is somewhat two months in advance, but it largely depends on the airline and a place of departure. There are numerous tools to guess the best time for your flight tickets, including flights.google.com, so you can use them to catch the best fare.

As for public transportation, I won’t be rushing to call an Uber or Lyft from the airport (Uber tends to be a few bucks cheaper than Lyft). The best option, in my opinion, would be buying and registering a Ventra (CTA rail) card. It can be done at the airport, at the time of writing was $5 (which you could spend on riding), can be topped up at any time from your credit card and is not time-constrained as the regular 1-day or 3-day tickets. The Ventra app also may be an option for some, but when I tried to install it, I got the ‘this app is not available in your country’ error, so I wasn’t able to test it further.

If you’re easily bored by reading other people training plans, strategies and the course of events over the long season, you can move directly to the Race day section, where I cover the Chicago Marathon race itself. Otherwise, you can stay and read through some physiological and psychological aspects of training and maybe have less stress in your own training and find some cure from your inner fears.

I started training with the Chicago marathon in mind more than a year prior to the race. However, when I got confirmation that I’m qualified (I reached my qualifying time in Boston in 2018), it was still 13 months left until the race. As training for this race alone seemed to be quite a long-shot goal, I signed up for Generali Berliner Half-marathon to try to improve my 21K PB (story here). This was not a major breakthrough due to various reasons and also signs of injury have started to occur.

My physiotherapist diagnosed me with shin splints, so it basically set my training back for more than a month (see TrainingPeaks Performance Management graph below). Then, another two-month recovery period followed. That meant I had to throw all my interim racing plans through the window (one more 21K was planned in the mid-June) and start planning my season anew with Chicago still in mind.

As almost every amateur athlete, I started to stress out that I won’t be able to prepare for my major race (even if it was 5 months left until the event). My major concern was a goal to qualify for New York because I needed to improve my PB by at least by 1:18 min to be able to meet 2:58:00 qualifying time.

A month before the event

My last B-race before the Chicago marathon was a 21K race in the Vilnius Marathon event. I did not set any specific goals, because even if I felt like I’m fully recovered from injury, I did not want to do a hard push and potentially make it reappear.

My initial strategy was to stick with 1:30 pacers and see if I can hold that pace (well I had to, as it was somewhat target for Chicago event). Everything started just fine and I hooked up to 1:30 pacer, but the pace felt a bit too slow, both by my RPE and my watch. As I found out later, the pacer guy was checking his tempo in a mobile phone and due to not-so-good GPS readings (as it’s always a problem in downtown with tall buildings) he was actually too slow.

When we ran into a park, he probably realized that he was way behind the schedule and made a really hard push to catch up. I tried to hold with him going around 3:55 min/km (6:20 min/mile) for a few minutes, but eventually, I decided to drop – it was just the beginning of the race and I really did not want to burn out. I catch up with a pace group on somewhat 15K (there were some guys left in it; obviously better runners than me), but then I decided to keep my own pace as I felt that I can, overcame the pacing group and carried on. I ended up with the new 21K PB of 1:27:55, which was a good motivator for the upcoming weeks.

However, this PB had its toll. In the mid-race, I started feeling some discomfort in my left groin. It almost did not bother me then as the adrenalin was kicking in, but the next day I started feeling a sharp pain and then I realized that it will not fade overnight. And with five weeks left to my A-race, it could definitely mean an end to any particular goals for a marathon finishing time.

Physio did not find something life-threatening, so I kept the same training load while doing some specific stretching moves. Pain has started to fade away so a week before Chicago Marathon I even signed up to the 10K C-race in Lincoln, Nebraska, called the EYE RUN. It is technically a fun-run and is held for the great cause – fundraising for the organization that improves the lives of blind and vision-impaired people.

During the last week, which was basically a taper, I did some running and carbo-loaded. Carboloading that works for me, is to have a few really big meals (pasta-based) on Friday, then eat light on Saturday (still something pasta-based), and then have something light, like oatmeal with banana, in the morning of the race. Taking a gel half an hour before the race helps as well.

Race morning was chilly, somewhat 5-6C (41-43F), so waiting for an hour in the race zone in a racing outfit was quite a challenge, even if I wore a hoodie that I bought a couple of days before from the Salvation Army shop. I paid $4.5 for it and was definitely worth it. I discarded it immediately before the race gun went off and I hope it was collected and donated again, so nothing was lost. At the starting line, some people were wearing heat blankets (not the best idea, because the morning was quite windy) or disposable paint suits. The latter were ok because they protected legs from the cold wind, however, it’s not the most eco-friendly option.

The Course of Events

My race strategy, that I was planning few days before, was to hold with the 3:00 pacers as long as I can and then either drop the pace and just finish the race, or if I’ll feel good at some 35K (mile 22), try to push the pace slightly and maybe even score the PR.

While standing in the crowd just before the race start, I found these pacers, listened to them chatting to other runners and heard them saying something like they will go slightly faster at the start just to beat the crowd, and then settle into the cruising pace. After the gun went off, the crowd went kind of chaotic, and pacers just disappeared. If I wanted to catch them, I had to run at the pace which was way faster than the one I was planned for my full distance. So I kept running at somewhat 4:00-4:05 min/km (6:25-6:35 min/mile) while perfectly understanding that I can’t keep that pace for long.

After some 5K I saw 3:05 pacers, I passed them and continued with my chase. At some 16K (10 miles) I finally caught up with my 3:00 buddies, kept with them for some 7-8K and then somehow realized that I felt more comfortable when chasing them. So I started increasing the pace very slowly and left these guys behind. I couldn’t find a steady pack to run with. And since it’s quite hard running alone in windy conditions, at least at the stretches with the strongest headwind I tried to hold in the group even if the pace was not exactly mine. Again, in the case of a tailwind, it was definitely worth leaving the pack and going alone at the full speed.

The final miles of the race were very hard (no surprise); I almost slowed down to the walk at the last bridge which was some 400 meters from the finish line. After I crossed the finish line, I could barely walk, however a can of beer, handed out by volunteers, worked as a perfect powerup.

Was it the gear?

I chose to run the Chicago Marathon in Nike Vaporfly Zoom 4% running shoes. Even if they are not my favorite, there’s so much marketing around them and other Nike carbon-fiber-enhanced shoes, that I just had to give them a try.

Chicago Marathon happened just one day after the INEOS 1:59 Challenge (where the sub-2 hour marathon was run for the first time in human history). There were so many controversies cooking around the shoes Eliud Kipchoge was wearing on that event, that I decided to do some math on my own performance.

My previous PB was 2:59:18, so I experimented a bit with a calculator from the University of Colorado, Boulder researchers (if you are cautious about clicking this direct link to download the file, you can find the same link in the Runner’s World article here).

According to this calculator, runner of my statue needs a ~2.1% improvement in running economy (which Nike 4%-ers claim to improve) to progress from 2:59:18 to 2:56:14. So, if statistical data from the famous New York Times article does tell the truth and Nike Vaporfly 4% shoes really boost your running economy bu 3-4%, it means my form was a bit worse than two years ago and I still scored the PR. Having that said, I’m pretty happy that even if this one may seem shady for someone, I still hold my previous PB of sub-3 🙂

The short takeout of this: