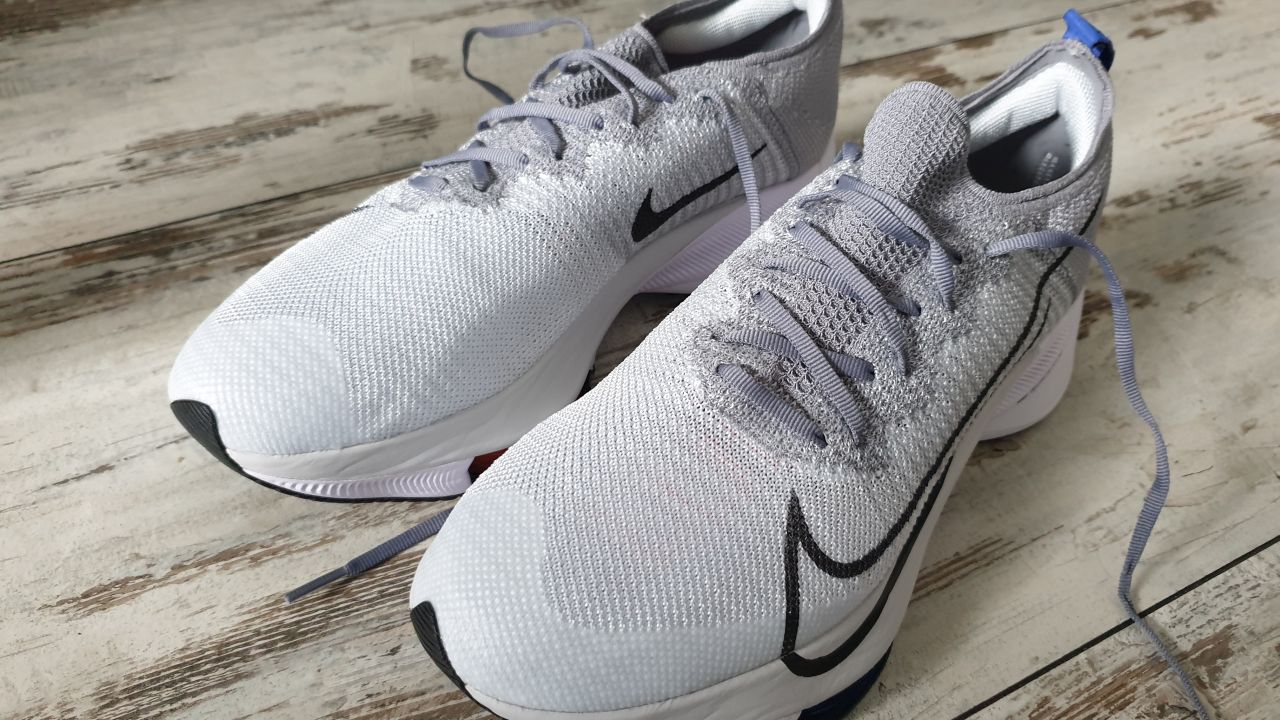 Promoted as a replacement to Nike Pegasus Turbo 2 premium training shoe, Tempo Next% promises to bring Zoom Air pods and other Nike’s inventions to the training ground.

Being a long time user of Pegasus Turbo 2 (clocked 1250 km / 780 miles and counting), which are a real pleasure to train in (and do some B/C races), I was very eager to try the next Nike’s shoes from the top-shelf training shoe series – Nike Air Zoom Tempo Next%. Feeling a bit of a marketing victim and somewhat like Apple… ehm… Nike fanboy, I was at the online shop precisely at 10 AM, September 14, 2020, holding my hard-earned 190.34 EUR in hand. The price, which is on par with Turbo 2 (the latter selling for 180 EUR), seems to be quite crazy for a pair of training shoes, which normally stand for below 100 EUR. But if the Tempo Next% running comfort will match the experience with Turbo 2’s, they may be worth a shot.

As I mentioned above, Tempo Next% inherited a couple of features originally found in Nike’s flagship Alphafly Next’s, like Zoom Air pods and ZoomX foam (the latter one introduced in the legendary Vaporfly 4%ers). They also have a nylon plate, which Nike claims is less rigid than carbon fiber and hence more suitable for training.

Visually having a very close shape to Alphafly, and Air pods fully integrated (see comparison pictures below), Tempo Next% should conform to the latest regulations of World Athletics of sole thickness. As you may have read in the news, with long-distance racing shoes recently becoming visually similar to disco shoes from the ’80s, World Athletics introduced the 4-cm-sole thickness rule, banning all shoes that would have more rubber under the runner’s foot. While there are no official numbers from Nike yet, various articles measure it to be thinner than Alphafly. Since Alphafly sole is officially measured to be 39.5 mm (and declared legal for Tokyo Olympics), Tempo Next% should also make the cut.

Nike’s Zoom Air pods (see them working in a GIF), that promise to legally return you some energy while running, are red-blue colored and remind normal/inverted time color scheme from Chris Nolan’s blockbuster movie Tenet. However, since such shoe sole design elements are usually seen in fancy kid’s shoes, it was a bit awkward to go for a run in it in public.

Putting looks aside, I took it for a quick smoke test:

Warmup/cooldown jogging (or doing other types of recovery in 5:30-5:45 min/km, or 8:50-9:15 min/mile pace) in these shoes is no fun. They feel rigid, and during my first kilometers, I even could feel the location of the pods under the balls of my feet. It’s not somewhat uncomfortable or annoying, but it could be compared to riding a superbike at a city speed limit. It’s possible, and it takes you from A to B, but it’s just not fun.

Let’s be honest – my tempo run pace may be close to jogging for some of you. But even in such pace (4:00 – 4:15 min/km, or 6:25-6:50 min/mile) Tempo Next% start showing what they are built for. There’s no more stiffness that can be experienced while jogging in recovery, however, they still feel firm and give you full control of your feet.

Some early reviews mention the shoe instability when cornering, but I somehow did not notice myself. I even deliberately did some corners even sharper than I would normally do, and I was quite happy with their performance.

Since it’s just a one-man opinion from the first run, take it with a grain of salt. But where I think these shoes really shine is both running uphill and especially downhill. In fact, running downhill (on the paved surface of course) in Tempo Next% was a somewhat new and pleasantly surprising experience. They just absorbed the hit your feet take with each step in steep descents, allowing you to enjoy the speed that gravity brings to you. So if you’re going to race in some rolling course, like the Boston Marathon, these shoes are definitely the ones to consider.

All-in-all – it’s hard to tell if Tempo Next% will be as durable as Turbo 2, but the first impression is quite nice. I’m pretty sure they can be used as racing shoes as well, so the price can be justified. And you don’t have to turn your wallet inside out to pay for 285 EUR Alphafly Next% (which most probably are sold out even for the price).

Ah, and the disclaimer – I don’t have any relationship with Nike, but probably hints at my pace already told you that 😅