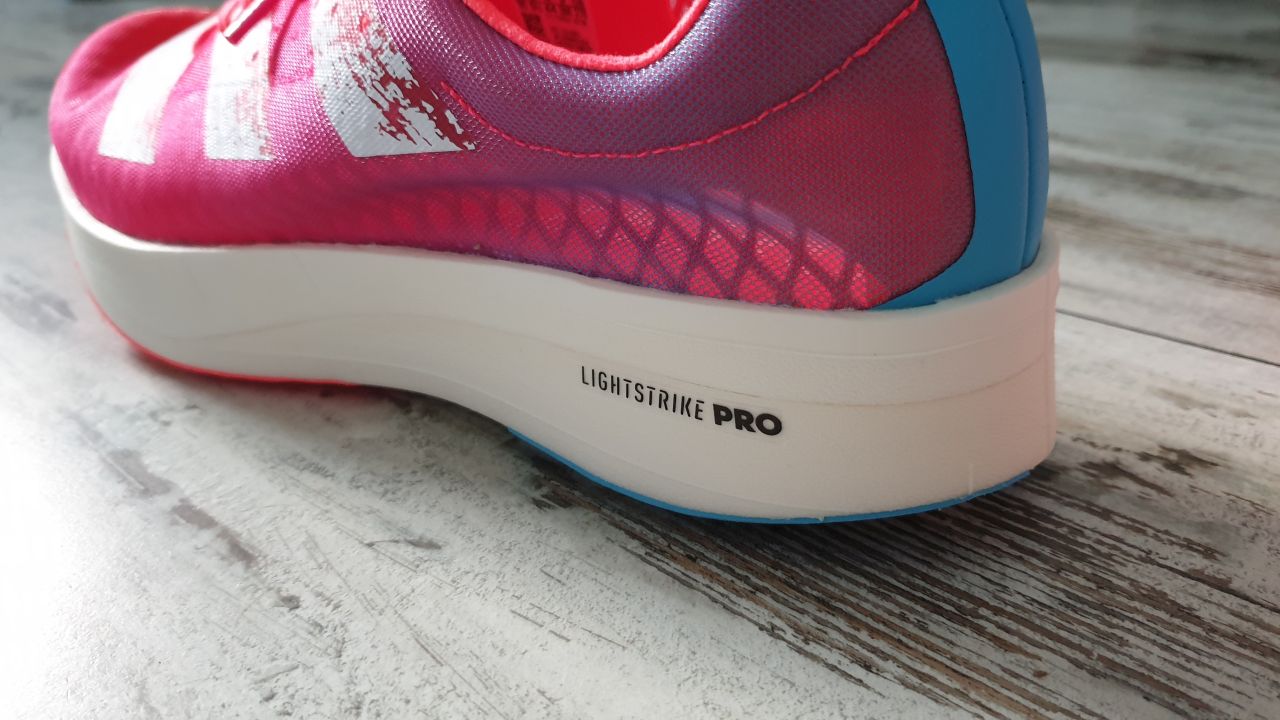 Announced and made available to a small audience in June 2020, Adidas Adizero Adios Pro was made publicly available on September 14, 2020. With five carbon rods and a carbon fiber plate under the runner’s heel, Adizero Adios Pro is Adidas’ response to high tech shoes from Nike, Hoka, and others.

Even with road running races constantly getting canceled or postponed, virtually any race super shoe is sold out. Adizero Adios Pro is no exception, at least at the time of writing. However, constantly refreshing your country’s Adidas e-shop page may reward you with a message that a few items of your size are in stock.

If you’re wondering if it’s worth it, here’s one more opinion to help you to decide.

Like virtually all the modern racing shoes, Adizero Adios Pro have some carbon parts. Differently from the competitors, they sport small nylon and carbon fiber plate under the runner’s heel and five carbon-infused rods called EnergyRods.

EnergyRods kind of mimic the metatarsal bones of the foot, and, according to Adidas, will optimize running economy by guiding the transition from heel to toe during the stance phase of running.

To get a general impression of how these shoes feel during the long-distance race, I took them for a 25K (15.5-mile) run. Advertised as being not just fast, WTFAST (obviously responding to Nike’s fast as F4%K) they seem to be adding some speed.

My run was flat and boring, however, the pace, shown by my Garmin, worried me a bit. I felt like I was running at my RPE 5-6, which could translate to 4:45 min/km, but my watch kept showing that I’m actually cruising at 4:25 min/km. My initial assumption that my Stryd, which broadcasts the instant pace, was somehow fooled by Adizero’s foams and carbons. After the workout was uploaded, it proved the pace to be true, so even if it was some kind of ‘new shoe’ effect, I’m sure it has some hidden potential as well.

As for cons, Adizero Adios Pro are slightly unstable on uneven surfaces, like cobbles. And those you can meet sometimes when the marathon route runs through some medieval streets in the old town of European cities.

Instead of traditional black rubber, the Adizero Adios Pro outsole is futuristically colorful. Even if the shoe description names it as a rubber, this material reminds more of foam and is slick as Formula 1 tire (see pic below).

It does not look extremely durable, however since it’s a racing shoe, it is not supposed to last for a thousand miles. Red and blue sole material seem to have different traction properties. However, it is not somehow noticeable when running – the shoe feels stable on both wet and dry tarmac.

Fun fact: after my 25K run, the EnergyRods pattern even can be slightly seen on the sole (see pic. below).

Since outsole durability potentially can be a concern, I wouldn’t recommend using this shoe for other purposes than racing. You have to burn it in first, of course, but abovementioned 25K / 16 miles should be enough. That distance will not make any damage but your feet will get used to the shoe and will not present any surprises on the race day.