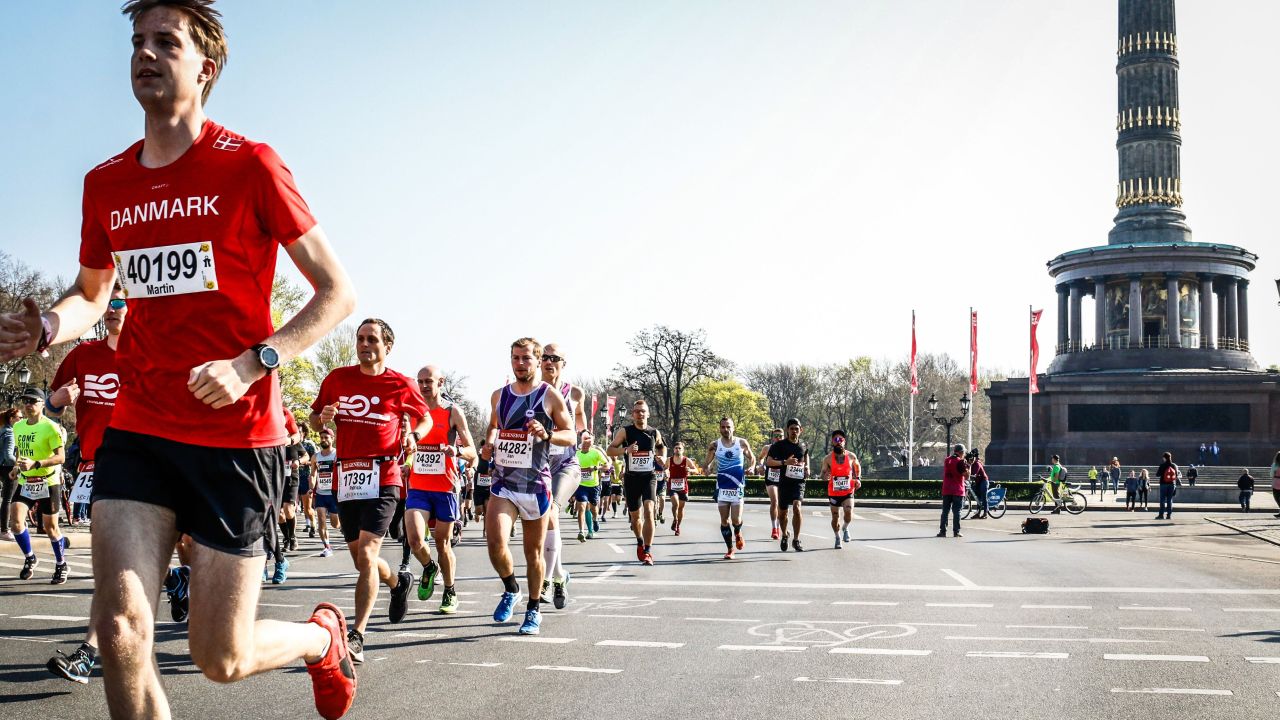 Berlin Half, Berlin Half-marathon, Generali Berliner Halbmarathon – doesn’t matter how you call it, this 21K race is a great opportunity to start your racing season. Held in Germany’s capital and sharing a big part of the course with one of the World Marathon Majors – Berlin Marathon – it is supposed to be flat, fast, very well organized and usually in good weather, as in the middle of April spring is already in full swing in Berlin. That’s one of the reasons why it’s sold out as early as February, so better sign up well in advance, get the training plan and start preparing.

Just after my plane landed in Berlin, I headed straight to Flughafen Tempelhof (or Tempelhof Airport) – a non-operational airport with a rich history from times of Cold War. Traditionally, both the Berlin Marathon and Berlin Half-marathon bib pickup and trade fair happens in this iconic place.

Bib pickup went fast (major load was expected on Saturday), so I had some time to walk around the fairgrounds. It was a bit smaller than during Berlin Marathon, but hosted most of the major brands (except Nike, as Adidas sponsors this event), lots of nutrition, recovery, apparel, and booths advertising other sports events – the usual stuff. And of course, you could not imagine German sports event without a beer stand (usually Erdinger, as they sponsor majority of at least running events), but alas – no free pasta party, so I bought some very basic pasta bowl for 6 EUR (because you just have to have pasta when picking up your race package, whatever the cost) and went to my hotel.

Accommodation in Berlin is not the cheapest one in Germany, so if you are tight on a budget (and every athlete is tight on a budget – you can always spend that extra on a new gear), I recommend staying at Hotel Air in Berlin. It is located at the shopping district with Adidas, Nike, Runners Point shops, to name a few (and not to mention regular chains as Peek&Cloppenburg, KaDeWe, etc.). If you would like to have lunch, breakfast or dinner – there are few restaurants literally next door, ranging from Thailand to more traditional German or Italian cuisines. Heck, there’s even a KFC in a walking distance, if you like to risk it before a race (or celebrate your PB afterward).

Also, it is a half-mile away from Großer Tiergarten – the arguably largest park in Berlin, where you can do your last pre-race runs (including these burst intervals – the park has plenty of paved stretches for the purpose).

On Saturday morning I decided to have some shopping. I was quite anxious to try legendary Nike Vaporfly 4% Flyknit running shoes. It may be more of a marketing legend, but anyway… Even RunnersWorld claims that there were numerous researches that proved their effectiveness. However, I was hesitating to buy it online as I wanted to try it first and to be absolutely sure that I will get the right size. An interesting fact that I tried to buy it in Boston’s and Detroit’s Nike shops when I was traveling there, however, the shoe was not available on site.

Nike shop, which was in a few hundred meters from my hotel, was all over in Fast As F4%k posters, obviously dedicated to Vaporflys – quite an aggressive slogan, but I somehow liked it. The shop was quite packed with runners – there were more than 33K participants in Berlin Half, so this is a huge event and all these athletes have to calm their nerves a day before. So I headed right to the shoe stand to try out a pair of 4%’s and it appears that I made no mistake – I had to go one size bigger than with my usual running shoes.

I spent the rest of the day chilling – I didn’t want to distract myself from tomorrow’s race and I felt that few lunchtime naps and slow time with a good read are exactly what I needed for a long time.

In the evening I put on my new Nike’s and headed for the run in the Tiergarten park. I started my final workout with 3K warmup run and then did 5x100m sprints with 100m rest. It was followed by a cooldown, ending up with a total distance of 5.5 kilometers. I have found such setup being the best for race’s eve — it won’t make you tired but will keep your legs energized. However, be extremely careful when sprinting and accelerate steadily. Purpose of this workout is not your 100m PB and you do not want to get an injury just before the race.

I must confess I was seriously considering to race with new Nike’s, but when I shared this idea with one of my athletes, she reminded me about ‘nothing new on the race day’ saying. Well, technically they were not new… They had 5K in them already… But I managed to brace myself and decided to race in my proven Adidas Adizero Adios 3.

The race was scheduled to start at 10:05 AM (for Wave 1), so there was no need to get up very early. The starting area is around 15-20 minute walk from closest underground (U-Bahn or S-Bahn) station. And as it is usual for Berlin running events, your bib number works as a ticket for public transportation on a race day.

I arrived at the starting area a bit too early, so there was no rush and I had plenty of time to stroll through an endless line of trucks accepting runner’s bags. Also, it was quite fun to watch inline skaters warming up – their start was 9:30 AM. It was a sunny and pleasant (yet windy) morning, so race conditions appeared to be close to ideal.

With start time closing in, I went to Block A (runners with a half-marathon time of 1:29:00 or less) and humbly lined up at the end of the sector. My target was to improve my Personal Best by as much as I can. Actually, I did not have proper 21K PB – my fastest half-marathon time was the first half of my best marathon, somewhat 1:28:59. So I assumed that most of the people in Block A will be much faster than me.

Sector quickly became packed up with people and I started a small talk with runner nearby wondering that so many people have quite a decent half-marathon result. Well, he said, “the question, which you have to answer at the moment of registration, is not about your target time, but about your best time ever, so potentially you could be running 1:29 somewhat 15 years ago and still have a place in this sector”. With that said – it’s better to secure your place in the middle of the sector if you’re planning to start strong.

After race started (by the way, title picture is taken a half mile from start, with everyone still fresh; and no, I’m not that Danish guy Martin, but rather that small bright yellow fella at the left edge of photo) I tried to do what my coach said right before the race – find a pack of runners to follow and hold the pace. So for the first mile, I was trying to find someone holding a pace of approx 4:05 min/km. After a few unsuccessful attempts, I attached to pair of Slovak guys (I bet they did not know I was following them :)) and kept a pace of 4:04 for first 10K.

And then somewhat unexpected started to happen. I began running slower, and slower, and slower. My Slovak pacers vanished in the crowd and I was not able to find anyone else to keep up with. Actually, I did not even try to. After each drinking point, I almost stopped to a halt and had a very hard time to accelerate again. Straight and flat street and cheering crowd, which could otherwise motivate me to hit the full gas, started to scare me. I was spent. My pace dropped from 4:02 min/km in K9 to 4:23 min/km in K17, which was flat as a pancake. And only then I kind of woke up and started accelerating again by reaching 4:15 in K20, 4:10 in K21 and 3:57 in last few hundred meters.

What could be the reasons of such course of the race? There may be several:

Long story short – I finished Generali Berliner Halbmarathon with 1:28:11. Still a PB, but not the one I was hoping for. However, that gives a lot of motivation for new analysis, training, racing and becoming better.

What to do after the Race

If you already did your shopping (or you’re just not spending your hard cash in brick and mortar shops), you can have some city tours. Some of them will bring you back to the times of World War II and remind you that the only thing necessary for the triumph of evil is for good men to do nothing.

I joined one of the tours offered by Berliner Unterwelten, called “From Flak Towers to Mountains of Debris”. This is basically a visit to a half-demolished Flak Tower – one of Berlin’s anti-aircraft defense installations. And don’t forget a sweater – it is chilly among these 2-meter-thick reinforced concrete walls.

After you see daylight again and if you are after the race, you should taste the kebap from one of the countless kebab shops. If you have no idea of which one to choose, head to Rüyam Gemüse Kebap – their chicken kebab on a plate is one of the best I’ve ever tried (and they serve rice instead of fries, so it won’t hurt your diet).

On the day you leave the city of Berlin, don’t rush to Berlin airport. It is small and boring – not what you would expect from the capital of Germany. So try to spend as little time as possible there, unless you have to catch up with your work and plan to spend a few hours clicking your notebook keyboard at the gate.

Next big race for me is Chicago Marathon 2019, however, I’ll try to squeeze several B races into my calendar, one of them most probably being 21K in Kaunas Marathon event in mid-June – need to improve that PB.